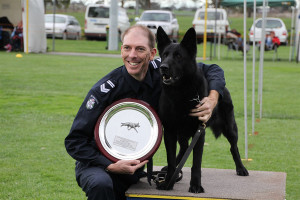 History of Service:
March 2009: Issued to S/C TUCKERMAN for participation in General Purpose Course 38
August 20, 2009: Qualified as an Operational General Duties Police Dog.
September 29, 2009: First Operational Arrest.
Located a suspect hiding in a back yard after he damaged a house.
Since August 2009, PB Angel has been involved in:
The arrest/location of 113 people.
41 instances of property locations.

During this time PB Angel has also attended numerous Public Order, Crowd Control and Disorder incidents, an aspect of operational duties at which PB Angel excels. It is impossible to quantify through statistics the impact PB Angel has, and the value of the support her presence provided to uniform members when attending such incidents. 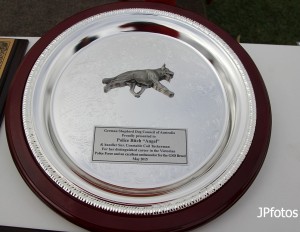 Notable Incidents.
In August 2010, PB Angel was deployed to search for an elderly man who had gone missing from a nursing home. The resident had been missing for several hours and his direction of travel was unknown. Due to his age and medical history, there were severe concerns for the wellbeing of this individual. While a formal search plan was being formulated, PB Angel began searching a creek reserve located in close proximity to the nursing home. Within five minutes of commencing the search, PB Angel had located the missing male, lying partially in a swiftly flowing creek at the bottom of a ten metre ravine in thick undergrowth. The male was unconscious and therefore unable to request help or call for help from searches. Due to the nature of the terrain, it required four police and several ambulance members to carry the male along the creek, through the undergrowth and to a location where the walls of the ravine could safely be traversed. If not for PB Angel, the missing male would not have been found until the following morning at the earliest, as a night time search of the creek at this location was unsafe.
Another example of good work by PB Angel occurred in December 2011, and involved the location of property which proved instrumental in solving numerous armed robberies. At this time, an unknown male was committing dozens of armed robberies on service stations around Melbourne’s west. Although he was believed to be utilising a car for transport, PB Angel was deployed after an incident at a 7-11. While being cast in a nearby street, PB Angel indicated the presence of human scent on a seemingly innocuous piece of cloth next to the curb. Despite initially being unsure what this item was, a detective was advised who diligently secured the item for perusal by the Armed Offenders Squad. It was subsequently ascertained that this item was a very distinctive bandanna that the offender had worn while committing a large number of the robberies. DNA obtained from the bandanna and surveillance footage definitively linked a suspect to these offences, for which he was convicted and imprisoned. It can be stated with a degree of certainty that had PB Angel not been used, this vital piece of evidence would not have been located.

Police Bitch Angel was nominated for the GSDCA Outstanding Canine Service Award by the German Shepherd Dog Club of Victoria. 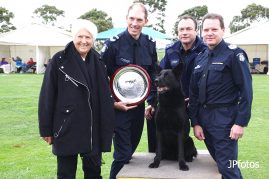 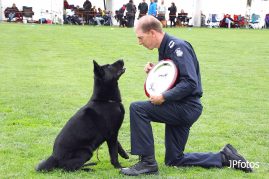 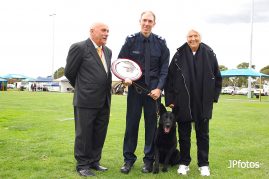 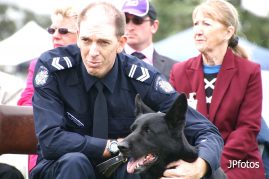