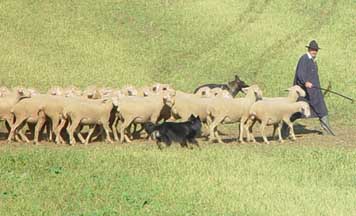 Brief history of herding in Australia

The German Shepherd Dog is a multi purpose working breed. The natural traits for which the breed was developed are now being utilised in Australia with the revival of Herding.

From time to time in reference to the sport of Herding we hear or read the statement ‘This is what our German Shepherds were originally bred for…’ The genetic roots of the German Shepherd today go directly back to the bloodlines of the working shepherd dogs in the pastures of Germany over 115 years ago. It was the energy, temperament and working character of these sheep dogs that earned the high regard and respect of Von Stephanitz and inspired him to develop his

own breed of shepherd dog that would be extensively useful to its master. 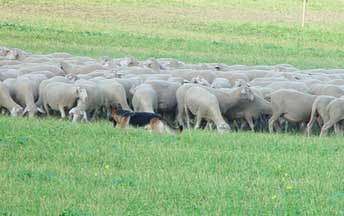 German Shepherds were originally bred to control 200 to 1000 sheep in relatively small grazing areas and keep them out of unfenced neighbouring crop fields. Each year the SV holds the National Sheep Herding Trials for Professional Shepherds and their dogs and at the annual German Sieger Show there are classes for full time working Sheep Dogs only, the HGH Class.

In Australia the German Shepherd has a relatively recent history when it comes to herding, as the dog was not popular with farmers prior to the lifting of the import ban in

1972. They believed the dog would mate with the dingo and breed sheep killers.

In the mid 1980’s a group of country based GSD owners who were members of the GSDL NSW Goulburn branch began to initiate interest and enthusiasm for German Shepherds to compete in the Sheep Herding Trials that were held around the country under the auspices of the Sheep Dog Workers Association. A number of sheep herding trials were held from 1989 onwards. These were Australia’s only official German Shepherd Sheep Herding Trials and were sponsored by the Goulburn Branch of the GSDL. The trials were run until the mid 1990s.

Since this time, many of our members around the country have worked diligently to train and title their dogs in this discipline, resulting in a revival of Herding in most states of Australia

Some Australian competitors of recent times:

Some Australian competitors of recent times:

ANKC rules and regulations for herding