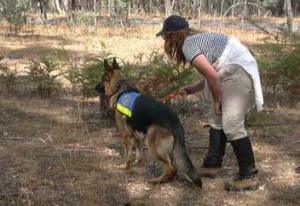 The German Shepherd Dog breed was initially developed for sheep herding from herding breeds, but it soon became evident that the dog had an ability and intelligence, along with physical prowess, to be utilized as a multi-purpose dog. Today many German Shepherd Dogs are used in the fields of protection and search and rescue.

GSD’s in Search and Rescue

The GSDCA supports the German Shepherd Dog’s utilisation for service in the community in the field of Search and Rescue.

In the recent Christchurch earthquakes the breed was used by a number of countries’ rescue teams to try to locate missing persons.

A number of Victorian and Tasmanian Club members have been active in search and rescue.

Southern Cross Search Dogs has been established to provide a focal point for the extensive canine search experience that currently exists with South Australia and Victoria. It also provides a platform to develop capabilities that extend beyond borders or jurisdictions, and promotes the principles of best practice and inter-organisational cooperation. This organsation was formed in 2014, based on the pioneering efforts of the ASSDA.

The ASSDA was founded in 1995, for the purpose of training, testing and making available search dog teams to user agencies, such as the police and fire brigades. In the early years, ASSDA focused on training and testing its teams for persons missing in bushland.

To ensure a high standard in training and testing, ASSDA became a partner of REDOG (www.redog.ch.Switzerland ). REDOG trainers and assessors regularly visit Australia, holding extensive and intensive workshops, as well as testing those teams that have reached the requisite standard. In addition, ASSDA Instructors regularly fly to Switzerland to attend REDOG seminars, workshops and courses there.
In recognition of two dogs becoming qualified, the German Shepherd Dog Club of Victoria made a special presentation to “Achim” with Elke Effler, and “Olga” with Peter Effler.

Today, Elke trains her dog, “Jochen” and was very proud to have been called in to assist in the search for missing persons who perished in the devastating Kinglake bushfires in 2008.

Despite not having been trained as a “cadaver dog”, Jochen was able to identify and signal traces of human remains. A remarkable effort.

In 2012 Elke and Jochen also travelled to Switzerland to train as an Urban Search and Rescue team.