The German Shepherd Dog Council of Australia (GSDCA) adopts under its constitution and rules, the Breed Standard for the German Shepherd Dog as adopted by the Australian National Kennel Council (ANKC). These controlling bodies in agreement after research and consultation have elected to choose the Standard from the country of origin, which is Germany. This is consistent with the Standard adopted by the international canine controlling body, the Federation Cynologique Internationale (FCI).

The GSDCA and the ANKC have provided a very detailed Extended Version of the Current Breed Standard :

View the current Breed Standard on the ANKC website

The German Shepherd Dog is medium size, slightly elongated, strong and well muscled, the bones are dry and the overall construction firm.
The length of the body is greater than the height at the withers by about 10 to 17%.

The immediate impression of the appearance of the GSD is of a dog slightly long in comparison to its height, with a powerful and well muscled body. The relation between height and length and the position and symmetry of the limbs (the angulations) is inter-related in such a way as to enable a far reaching and enduring gait. The coat should be weatherproof for both varieties. A beautiful appearance is desirable, but this is secondary to the dog’s and variety’s usefulness as a working dog. Excessive looseness of overall ligamentation is a major fault. Sexual characteristics must be well defined, i.e. the masculinity of the male and the femininity of the female must be unmistakable.

A true to type GSD gives an impression of innate strength, intelligence and suppleness with harmonious proportions and nothing either overdone or lacking. His whole manner should make it perfectly clear that he is sound in mind and body and has the physical and mental attributes to make him always ready for tireless action as a working dog.

Type is created by the fusion of the dog’s constitution, sex characteristics, size, expression, temperament and conformation, which altogether, go to make up its ability to serve as a working dog. These points are all laid down in the Standard and should be adhered to. The term “type” is not used with the same meaning or context as that of the term “variety” when used to describe or attribute the GSD.

The GSD is the ultimate trotting breed, where a tireless and preferably economical trotting action is called for. Many of the working breeds fit into this category, with differences mostly in the forequarter where added nimbleness is asked for, e.g. the Collie breeds, which are lighter boned and more open in angulation than the German Shepherd Dog. The German Shepherd Dog is not being asked to be especially nimble, rather a tireless worker at its natural gait, the trot. The ideal German Shepherd Dog is one that covers the maximum amount of ground with the minimum amount of effort, i.e. fewer steps, resulting from far forequarter reach and strong hindquarter drive.

The main characteristics of the German Shepherd Dog are: steadiness of nerves, attentiveness, loyalty, calm self-assurance, alertness and tractability, as well as courage with physical resilience and scenting ability. These characteristics are necessary for a versatile working dog.

The German Shepherd Dog must be of well balanced temperament, steady of nerve, self assured, absolutely at ease (except when provoked), and good natured as well as attentive and easy to train. He must possess instinctive drive, resilience and self confidence in order to be suitable as a companion, watch dog, protection, service and herding dog.

It is most important not to place dogs that are shy or aggressive as these are disqualifying features; any weakness of character should be penalised. Character can easily be assessed by walking towards the dog from the front in a somewhat slow way and observing the dog’s eyes. Whilst he is in stance, observe whether the dog is alert or deadpan or disinterested. He should be alert, calm and self-assured.

With an abundance of vitality he must be tractable enough to adapt himself to each situation and to carry out his work willingly and with enthusiasm. He must possess the courage and determination to defend himself, his master or his master’s possessions should the need arise. He must be observant, obedient and a pleasant member of the household, quiet in his own environment, especially with children and other animals, and at ease with adults. Overall, he should present a harmonious picture of nobility, alertness and self confidence.

The head is wedge-shaped, proportionate in size to the body, (length of head about 40% of the height of withers) without being coarse or too elongate, in overall appearance dry and moderately broad between the ears. The forehead is only slightly domed when viewed from the front and the side and without any or only slightly indicated central furrow.

The proportion of the skull to muzzle is 50%:50%. The breadth of the skull corresponds approximately to its length. The skull (viewed from above) tapers evenly from the ears to the nose with a sloping, not sharply defined stop, into the wedge shaped foreface (muzzle). Upper and lower jaws are strongly developed. The top of the muzzle is straight, a dish faced or convex curve is not desired. The lips are tight, well fitting and of a dark colour. The nose must be black.

The overall appearance of the head should be clean cut and fairly broad between the ears. The cheeks should form a very softly rounded curve and should not protrude. The skull extends from the ears to the bridge of the nose; tapering gradually and evenly and blending without too pronounced a stop into a wedge-shaped, powerful muzzle. In males, the width could be slightly greater; and in females slightly less than the length. The top of the muzzle is straight, almost parallel to the forehead. A muzzle which is too short, blunt, weak pointed, overlong or lacking in strength is undesirable. 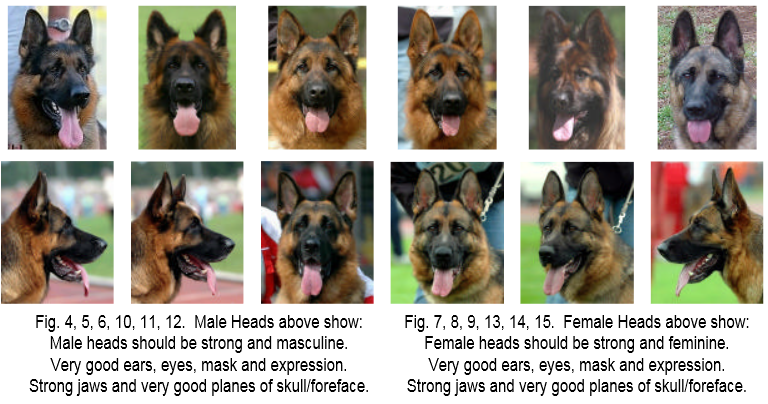