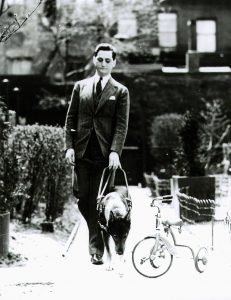 The modern guide dog story begins during the First World War, with thousands of soldiers returning from the Front blinded, often by poison gas. A German doctor, Dr Gerhard Stalling, got the idea of training dogs en masse to help those affected. While walking with a patient one day through the hospital grounds, he was called away urgently and left his dog with the patient as company. When he returned, he saw signs, from the way the dog was behaving, that it was looking after the blind patient.

Dr Stalling started to explore ways of training dogs to become reliable guides and in August 1916 opened the world\’s first guide dog school for the blind in Oldenburg. The school grew and many new branches opened in Bonn, Breslau, Dresden, Essen, Freiburg, Hamburg, Magdeburg, Münster and Hannover, training up to 600 dogs a year. These schools provided dogs not only to ex-servicemen, but also to blind people in Britain, France, Spain, Italy, the United States, Canada and the Soviet Union.

Unfortunately, due to a reduction in dog quality, the venture had to shut down in 1926, but by that time another large guide dog training centre had opened in Potsdam, near Berlin, which was proving to be highly successful. This school’s work broke new ground in the training of guide dogs and it was capable of accommodating around 100 dogs at a time and providing up to 12 fully-trained guide dogs a month.

Around this time, a wealthy American woman, Dorothy Harrison Eustis, was already training dogs for the army, police and customs service in Switzerland. It was to be Dorothy Eustis’s energy and expertise that would properly launch the guide dog movement internationally.

Having heard about the Potsdam centre, Eustis was curious to study the school’s methods and spent several months there. She came away so impressed that she wrote an article about it for the Saturday Evening Post in America in October 1927.

A blind American man, Morris Frank, heard about the article and bought a copy of the newspaper. He later said that the five cents the newspaper cost him “bought an article that was worth more than a million dollars to me. It changed my life”. He wrote to Eustis, telling her that he would very much like to help introduce guide dogs to the United States.

Taking up the challenge, Dorothy Eustis trained a German Shepherd Dog, Buddy, and brought Frank over to Switzerland to learn how to work with the dog. Frank went back to the United States with what many believe to be America’s first guide dog.

More about the history can be read here

Seeing Eye co-founder Morris Frank, trained the one of the first German Shepherd Guide Dogs. Watch the video below.

One of the first Seeing Eye dogs was born on October 15, 1926, in Switzerland. About 16 months later she was matched with Morris Frank, a 20-year-old college student and insurance salesman who had traveled from America to be matched with a dog who could guide a blind person. He promptly renamed the German shepherd Buddy. This historic photo shows Morris Frank being guided around a tricycle on a sidewalk by Buddy.

Morris and Buddy traveled the country demonstrating that it really was possible for a dog to work as a guide. But soon they had another challenge: public access. Many stores, restaurants, hotels, and other businesses had a strict “no dogs allowed” policy, and there were no exceptions for service dogs — after all, they had just been invented!

Morris and Buddy campaigned tirelessly for the right to go anywhere that any other member of the public can go. While giving a speech in Washington, D.C., someone had the bright idea of having Morris give a demonstration of Buddy’s abilities — without telling Morris about it. The route Morris had taken to the stage to give his talk was quietly blocked with chairs. When Morris gave Buddy the command to leave the stage the way they’d come, she refused.

“She had watched the whole proceeding from the platform and had seen the complicated series of impediments set up for us,” Morris wrote in “First Lady of The Seeing Eye”. “Without a second’s hesitation she simply took me the quickest, safest way to our destination.”

Rather than navigating through the obstacle course, Buddy led Morris across the stage and to a different, unblocked aisle. Problem solved!

“The audience went wild with applause. By taking the commonsense way out of our predicament, Buddy had given a far more remarkable demonstration of her prowess than they had ever anticipated,” Morris wrote.